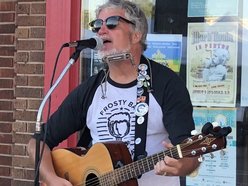 He has recorded dozens of songs at Casey's Musical Dustbin, his lo-fi  recording studio located in an undisclosed top secret location. He sings all of the vocals and plays all of the instruments himself and releases them on his own Iaintgotno record label.   In addition to recording under his own
name, he has released songs under various other aliases including;  The Parmatown Keg Stompers,  The North Pole Chimney Shakers, The Ohio Melonhead Eradication Society and The Moonville Tunnel Beer Drinkers Association.  Most of these tunes can be heard via Spotify, Amazon, Apple or wherever you stream your music.

Casey performs live  as a solo artist and with a number of duos and groups including The Lap Dawgs,  The Rock N Steins,  The Walleyes  and The Rewinds performing a wide variety of tunes covering everything from Louie, Louie to The Wabash Cannonball.

He  hosts and produces the podcasts,  Casey's Musical Dustbin and Radio Free Logan. You can checkout his blog at,  Casey's Rock N Roll Gazette.

​ In his spare time, Casey enjoys indulging  in activities that were forbidden in his youth such as; loafing, slouching and milling around.